The Fog of War – Lesson #11: You can’t change human nature

McNamara explains the fog of war: 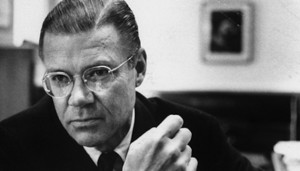 What “the fog of war” means is: war is so complex it’s beyond the ability of the human mind to comprehend all the variables. Our judgment, our understanding, are not adequate. And we kill people unnecessarily. Wilson said: “We won the war to end all wars.” I’m not so naive or simplistic to believe we can eliminate war. We’re not going to change human nature anytime soon. It isn’t that we aren’t rational. We are rational. But reason has limits.

McNamara, choking on emotion, shares the following in the last scene of the film:


There’s a quote from T.S. Eliot that I just love:

We shall not cease from exploring
And at the end of our exploration
We will return to where we started
And know the place for the first time.

Now that’s in a sense where I’m beginning to be.