The Liberation of My Workstation 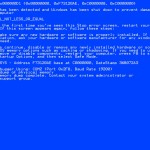 “DAMN you, Vista! I shall liberate my workstation from your death-grip forthwith!”

With this clarion declaration which, in my oppression-stoked rage, was made with all of the sentiment and perturbation of rebels and patriots gone before me, (is the analogy a bit Philistine? Certainly …) I threw off the chains of The Beast and replaced Windows forever with my favorite Linux distribution.

I’ve long since made Linux my sole operating system on nearly every box on my network. To date, though, I have retained Windows on my primary workstation, running both Debian and Ubuntu in virtual machines, due to my dependence on several software packages which are not available (either to me or at all) for Linux. I was determined this evening, however, to inch away from this by dual-booting Linux with Vista. Several hours later, to my fury, my plans were thwarted when, twice, the NTFS partition would not resize with gparted! This was particularly frustrating as I waited nearly 2 hours each time for gparted to fail on the resize operation. Bloody NTFS!

So, with Eddie Izzard’s beguiling comedy as a soundtrack, I dumped a back-up of my files onto my archive hard drive on the workstation, and deleted that bloody NTFS partition once and for all! Let the death knell for Windows ring out! I’d rather virtualize Windows on an as-needed basis than be strong-armed into what I can and cannot install on my own hardware.