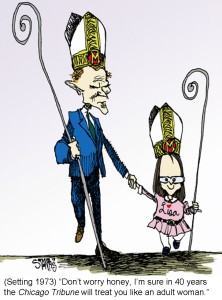 Shortly before I left the house yesterday for the airport, the home line rang and displayed a nonsense phone number on the caller ID. (“100000000000” was the number — clearly a spoofed number to obscure the identity of the caller.)

If I may digress, briefly, I find it particularly insidious that the campaigns of local and elected officials deliberately mask their efforts to telemarket the electorate in this manner. This is the most recent in a series of similarly obfuscated phone calls we have received — despite our private number and listing on the DNC registry. (It seems, however, that the DNC registry is only aimed at stopping for-profit telemarketing and provides a massive loophole for campaign calls from non-profit organizations.)

The caller identified herself as phoning from Illinois Attorney General Lisa Madigan‘s office. What followed was a surprisingly rude line of responses culminating in an insultingly xenophobic hang-up. I am shocked that the reelection campaign an accomplished politician like Lisa Madigan would have succumbed to such shoddy staff work. Lisa — whomever is running your campaign should be summarily flogged.

The content of the discussion is best relayed in conversational format.

CG: “Good evening?”
LM: <Protracted pause as the auto-dialer routes the answered call> “Uh … yes, may I speak with [my wife]?”
CG: “May I ask who is calling?”
LM: “Uh … this is from Attorney General Lisa Madigan’s office.”
CG: “Is this a campaign call?”
LM: “Umm … not really. We were just calling to see if she was going to vote this year.”
CG: “That sounds like something we’d probably classify as a campaign call and decline to receive it …”
LM: <Before I can complete my polite closure to the conversation> “Well, I’d need to hear that from her.”
CG: “No, you don’t. You’ve phoned my home, my phone number. I’m telling you that we are not interested in receiving campaign calls on this number.”
LM: “Well, she signed up to receive them.”
CG: <Growing vexed>”No, she certainly did not!”
LM: “Well, I’m looking at the details right here on her voter registration.”
CG: “Right — she registered to vote. She didn’t sign-up to be campaigned to.”
LM: “Well, I don’t know how this works, but …”
CG: <Interrupting>”I’m telling you that this is how this works.”
LM: “… And you’re from this country, and you know how this works?”
CG: <Stunned speechless for a moment> “Are you kidding me? This is Lisa Madigan’s office phoning, you say?”

<My question was met by the silence of a dead line>

Troubling, indeed, to endure rudeness and ignorance of this magnitude from a woman who interrupted my evening by phoning my home. Hopefully Steve Kim has a more enlightened view on immigration, given his parents’ Korean background.